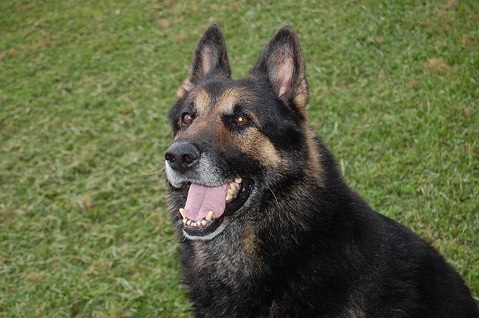 Yoda, was a big strong dog that loved to swim, chase tennis balls, retrieving dummies, and rabbits.  He was a bold dog and was not afraid of anything.  He was very indifferent to people he did not know but loved a good rub on his head and a scratch on his side.  He was friendly to everyone he met.  When Yoda was in his prime was he was around 85 to 90lbs.  When Yoda came to us he was already seven years old.  We had six really good years with the old guy.  He will certainly be missed.  Yoda was the cornerstone dog in starting our kennels. 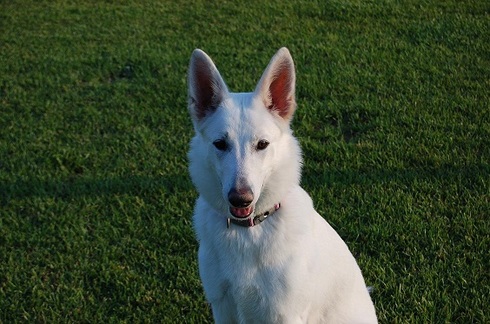 Ziva is a sweet tempered loving dog as long as she knows you.  If you are a stranger she is very protective of her home and family.  She loves to play with kids, chase tennis balls, and sleep in her easy chair.  Ziva is around 65lbs. 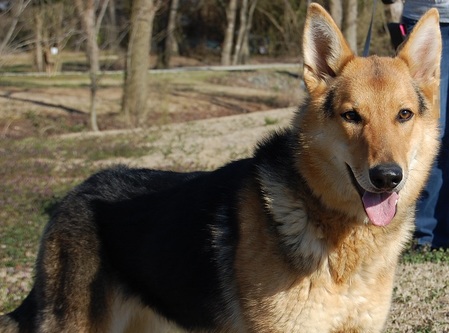 Dutches is a sweet energetic Shepherd that loves to play.  She loves to play with puppies, kids, Yoda and most of the other dogs.  But she was certainly the QUEEN of the kennels.  Dutches is around 65 to 70lbs.  She has been retired and lives with the Dean family in Goldsboro, NC.

RETIRED! & living the good life with the Dean family in Goldsboro, NC 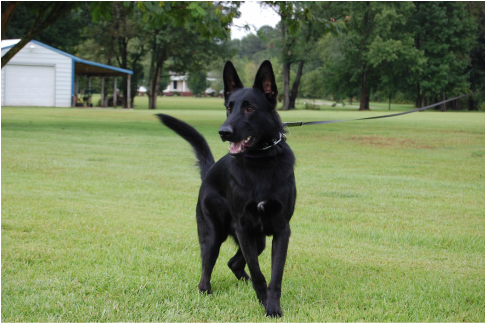 
Cujo is  extremely smart  and full of energy.  He loves to play throw the tennis ball, Chase the red dot light, and he is trained in protection and bite work.  Cujo is around 80lbs. 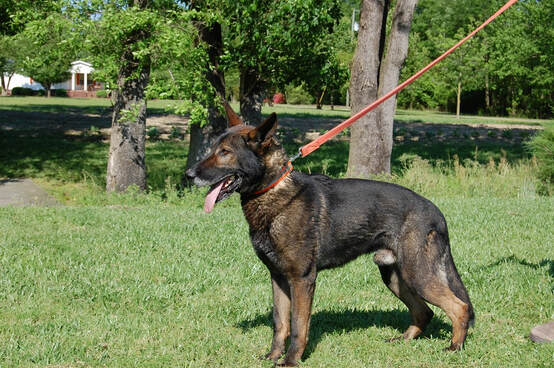 
Jauger is a high  energy sable colored shepherd with with a sweet personality.  Jauger is a descendant of German working lines.  He likes running around with the other dogs on the morning walks.  Jauger is around 65lbs. 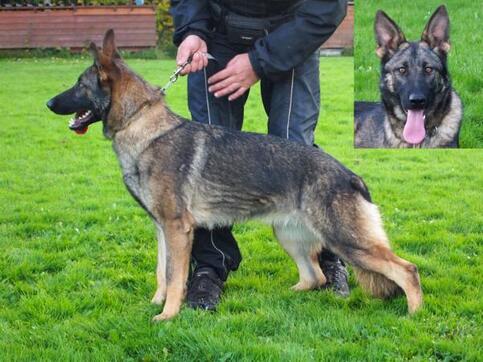 Jordana is an older dog that is a proven mother.  She is an eastern European Czech bred German Shepherd.  She has a sweet disposition with people but she can put other dogs in their place as she is an alpha female.  She is from a long line of European working dogs.  She came to us basically as a rescue.  At some point in her before she arrived with us her previous owners decided to crop off her ears!  We do not know why and she does look a little funny.  The above pictures are of before this took place, while she was still in Europe.  Jordana also has a very high prey drive! 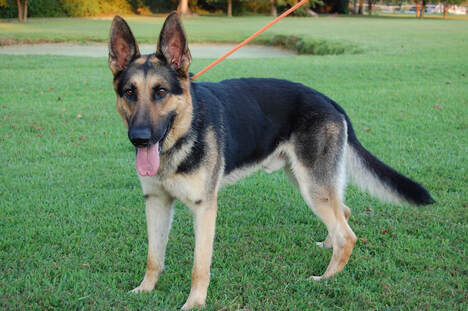 "Cash" Just in Time to Cash Out

Cash is a high drive hard charging dog.  He's very alert and has a hard bite.  Cash also has a sweet side that he'll show to those folks that he likes.  If you're a stranger then give him a wide birth.  Cash is a BIG boy and a tall shepherd as well.  He weighs in at around 80lbs. 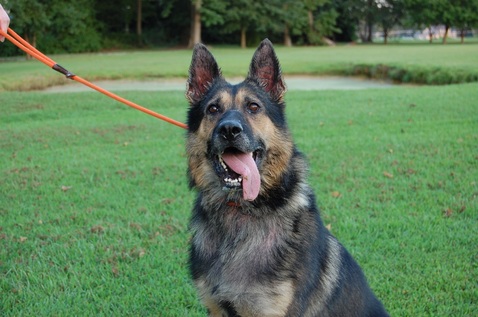 Freddy is a retired military working dog.  He was an explosives detection dog for the Army.  Freddy is a true vet.  He's got tours in Afghanistan under his belt.  Now the hardest thing he has to do is chase retrieving bumpers, swim in the ponds, and play tug of war on a bite sleeve.  Freddy is a BIG boy and weighs in a around 90lbs.  He is high drive but has a good temperament. 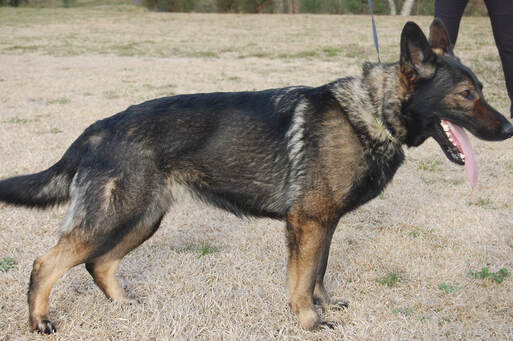 Elka is a product of breeding from right here at N.E. Cape Fear German Shepherd Dogs.  Her father is our dog Jauger and her mother is one of our now retired females Grace.  She is very sweet with people and gets along with the male dogs.  She is very intelligent.  She is a compact little girl at around 50lbs.  Her prey drive is also very high.  She like to race our field trial bred Labrador Buster for bumper retrieves from our ponds. 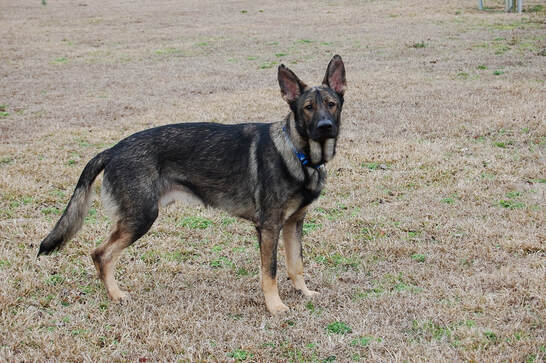 This handsome little devil is our up and coming working dog and stud Blitz.  Blitz is a product of breeding here at N.E. Cape Fear German Shepherd Dogs.  His mother was Jordana, who we lost January of 2020.  His father is our retired dog Ragnar.  Blitz is from Cech working lines.  He has very high prey and ball drives.  He weighs in a 80lbs.  He has already began his training in tracking, apprehension, and protection.  He is social butterfly with most folks but if he deems you a threat you might be in trouble. 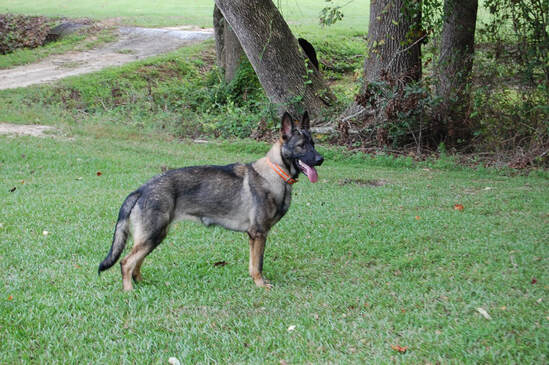 Jelly is a litter mate with Blitz and Mocha.  She is a high energy always on go type dog.  She loves to play with anyone or any dog that will play with her.  She has a super high prey drive and very intelligent.  She will be joining our breeding program soon.  She weighs in at 65lbs. 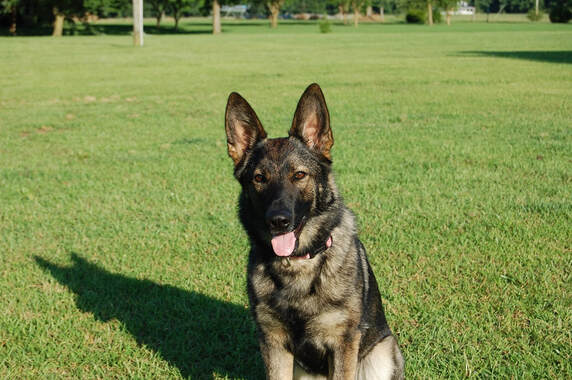 Grace is one of our retired dog that now lives with the Jackson family in the Fayetteville area of NC.  She is a high drive dog with a ton of energy.  She loves to play fetch, jump into spraying water from the water hose, and swim in pretty much any body of water that she can get into.  She has a sweet temperament and never met a stranger. 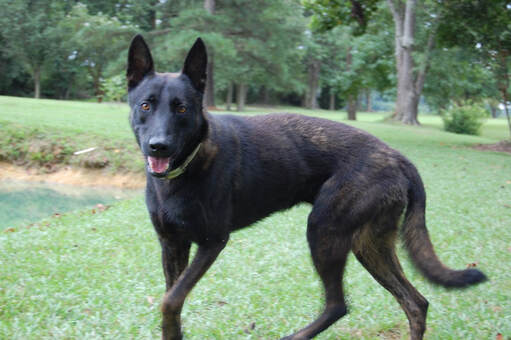 Little-man Echo as you can tell by looking at him is NOT a full blooded German Shepherd.  Echo is actually a mix breed working dog.  He is half Dutch Shepherd and half Belgium Malinois .  Echo was brought into our breeding pool to add a little more work ethic and athleticism to our dogs.  Echo is not a mean dog at all.  He is actually a bit shy but his prey drive is through the roof!  Once he latches onto something there is no turning it loose! 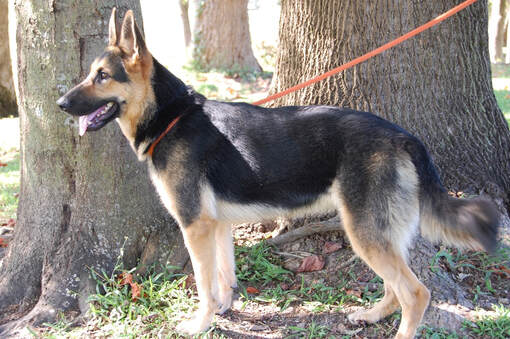 This pretty girl is Wheezey. She is from our very last litter we did between Cujo and Dutches back in January 2020. We thought we had her in a good forever home but the owners contacted us and could no longer care for her. So we took her back in and decided to keep her. She is only 8 months old now and has some growing up to do but hopefully she will make it into our breeding program int he near future. Wheezey is full of energy and loves to play! she is also VERY intelligent and gets grasp on things pretty quickly. ​ 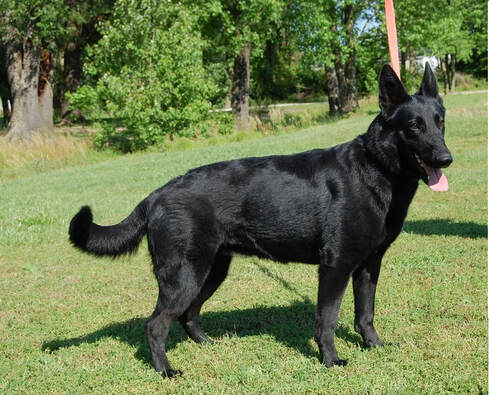 Isa is one of our pups that we bred right here at Northeast Cape Fear German Shepherd Dogs.  She is a pup from our Cujo and Dutches.  Isa has a high prey drive and can be aloof with strangers and she can also let them know they are not welcome in her domain!  She is no longer with us but retired out of our breeding program and now lives with the Radanovich family in Jacksonville, NC. 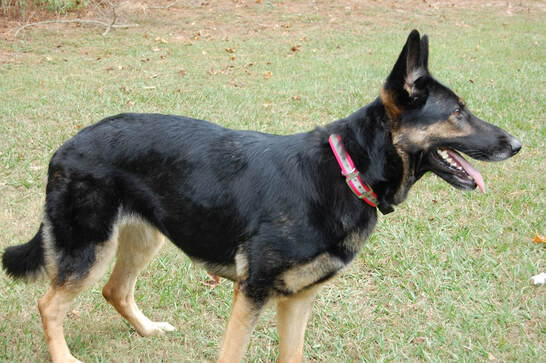 Luna is a third generation puppy from our kennels.  Her dad is Cash and her grand parents are our dogs Jauger and Grace.  Her aunt is our dog Elka.  Luna does not live with us full time.  She mostly stays with the Flowers family in Kenansville.  She is a high energy, sweet tempered, intelligent dog that is extremely loyal. 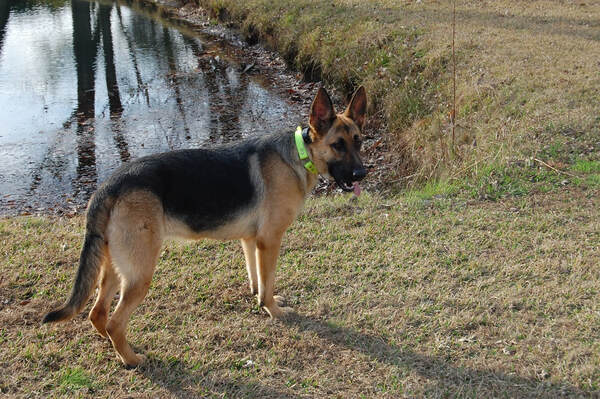 Rhea is a sweet tempered and playful dog.  She has tons of energy.  She was brought in to our breeding program because she is no relation to the other dogs here at Northeast Cape Fear German Shepherd Dogs.